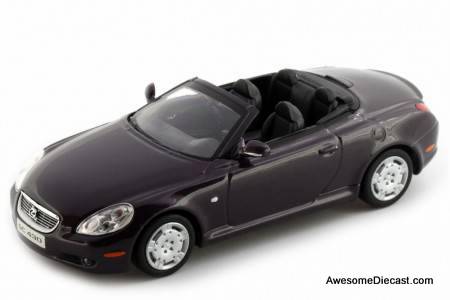 At the 1999 Tokyo Motor Show, Lexus displayed its Sport Coupe concept, a V8-powered convertible, signifying its plans for a replacement for the first-generation SC 300/400. The production version of its new sports coupe-convertible, the SC 430, debuted at the New York Auto Show in April 2000. The car was scheduled to go on sale in the second quarter of the following year. Power was provided by a 4.3 L 3UZ-FE V8 engine with variable valve timing (VVT-i) mated to a five-speed automatic transmission. This engine was the same model as that found in the UCF30 Lexus LS. The SC 430's V8 could produce 288 hp (214.76 kW) and 430 N⋅m (317 lb⋅ft) of torque, allowing the coupe to go from 0–60 mph in 6.2 seconds.

In contrast with the previous generation model, the redesigned Lexus SC was intended as a convertible from its inception. The development team was led by chief engineer Yasushi Nakagawa from 1996 to 2000. Lexus designers from Europe and Japan worked together to create a streamlined design. A design theme was chosen in 1997 developed by Sotiris Kovos, who in return was named chief designer. Led by Kovos, designers traveled to the Côte d'Azur to develop the vehicle's exterior shape, and studied the region's architecture, lifestyle, and harbors. The resulting convertible of 1998 received character lines similar to the region's yachts, in contrast with traditional waveform lines. The vehicle's side profile, the product of extensive wind tunnel testing, was intended to channel air around the passenger compartment at high speed during top-down driving. Design patents were filed in Japan, at the Japan Patent Office on 14 June 1999 under patent number 1095312.

The SC 430 featured a retractable aluminium hardtop, all-leather interior with brushed-aluminum accents, navigation screen with folding wood panel, and 18-inch aluminium wheels. Chrome Lexus emblems were mounted on the back of the front seat headrests. The coupe has four seat belts and could technically seat four, but rear-seat space is limited. The hardtop fully retracts in 25 seconds. Standard luxury features include Burl Walnut or Bird's Eye Maple wood trim, a Mark Levinson premium sound system, DVD-based navigation system, and headlamp washers. For additional trunk space, as an option the SC 430 could be equipped with run-flat tires.

At its launch, the SC 430 was marketed as the "jewel of Lexus", and as the marque's first convertible, was intended as a more ostentatious addition to the Lexus lineup. Reviewers from Car and Driver magazine praised the SC 430 for 2002 as "an unqualified success", calling it "comfortable, fast, smooth, and quiet" with "all of the virtues expected in a patrician roadster."

In 2004, Lexus unveiled the Lexus SC "Pebble Beach Edition", a limited-production model of the SC. The special edition SC was produced in partnership with the Pebble Beach Company , and featured a unique exterior and interior color combination which changed with each model year. This edition was offered for model years 2004 through 2009 production of the Pebble Beach edition was limited to varying units each year (see table below for counts). Each Lexus SC Pebble Beach edition coupe exhibited: unique colors (changed each year), special badging (featuring the "Lone Cypress" logo) on the front fenders, center console, and floor mats. For the 2006 model, a rear spoiler and spider alloy wheels was also included. In October 2009 Road & Track published some pictures of that model year.

In 2004 and 2005, J.D. Power and Associates' Initial Quality Survey awarded the SC 430 as the highest ranked premium luxury vehicle. Kelley Blue Book gave the SC 430 its Best to Hold Value Award in 2002. In June 2004, a custom-designed Carolina Herrera SC 430 was shown at the Madrid Motor Show. The special edition SC 430 CH used a 'Testa di Moro' body color, with matching interior leather and carpeting, along with designer logos on the wheels and door sills. A line of accessories was also developed for the vehicle.