The company Autenrieth, founded by Georg Autenrieth in 1912, evolved into one of the big car body makers in Germany. In big letters the company name “Darmstädter Karrosseriewerke G. Autenrieth” was displayed on the front of the building in Darmstadt. In the glory days up to 400 workers were in employment. In the first place the Darmstadt company built the car bodies for the company Falcon Werke AG (1921-1926) and for the company Röhr-Auto AG until its bankruptcy in 1935.

It became apparent that the in-house designers had the right sense of how to design extraordinary cars. In the 1930s also BMW ranked among the customers of Autenrieth. Beside BMWs also customized copies that based on the chassis of Trumpf and Standard were set on its wheels. In the course of the time the production of such delicate and unique cars became more and more sophisticated and therefore also prohibitive. Around the years 1937 and 1938 also the streamline topic had influence on the design of the luxury vehicles. The order to fit the standard chassis of an Adler with a new luxury design from an unknown British business man dates back to this time too. According to surviving information the unique Adler had a sales price of 128,000 Euro, translated into today’s currency. More details about the car and its whereabouts are rarely seen or absent. Only the fact that the car was involved in a bad accident in which the front left wheel cover fell off and the rear wheel cover got severely dented is additionally known.

Backgrounds to this accident are lost as well as the complete history of the beautiful streamlined car, which allegedly was able to accelerate to a top speed of up to 170 km/h. 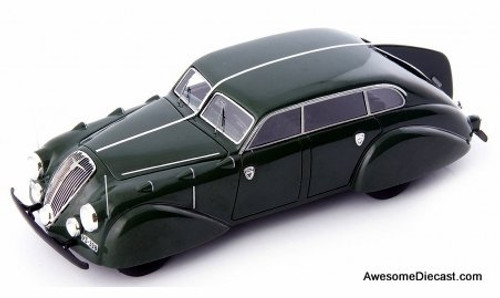