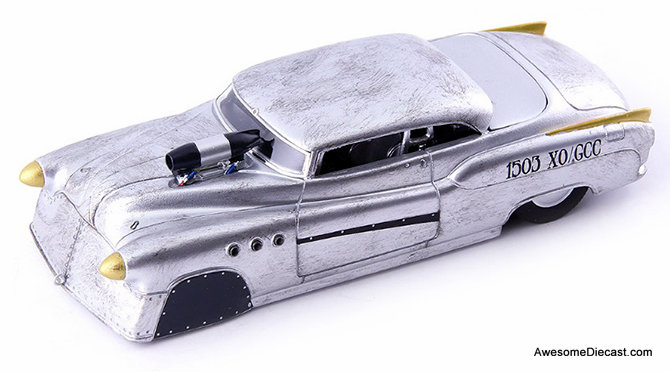 These are limited edition models of only 333 pieces distributed worldwide

In 2008, photographer Jeff Bock moved from Flint, Michigan, to Phoenix, Arizona. At his new home, he noticed a run-down car in an old sawmill, which after a closer inspection turned out to be a 'Buick Super Riviere' from 1952. Coincidentally, he saw a feature film at that time, which was about speed record chasing and from then on his mind was made up to resurrect the old road cruiser into a world record car! In just two month, the ultimate high-speed racing car was created - just in time for the 'Speed ​​Week' event on a salt lake in Bonneville in August 2009. Jeff Bock competed in the class XO / GCC, which he also wrote in large letters onto the aluminum body just above the rear wheels. The cryptic designation of the star class included combustion engines of older design.

Made from diecast metal. Attachments in box.

Industrial designer Brooks Stevens (1911-1995) might be best remembered today for the clever, low-cost product makeovers he performed for the independent automakers, including the Willys Jeepster and...