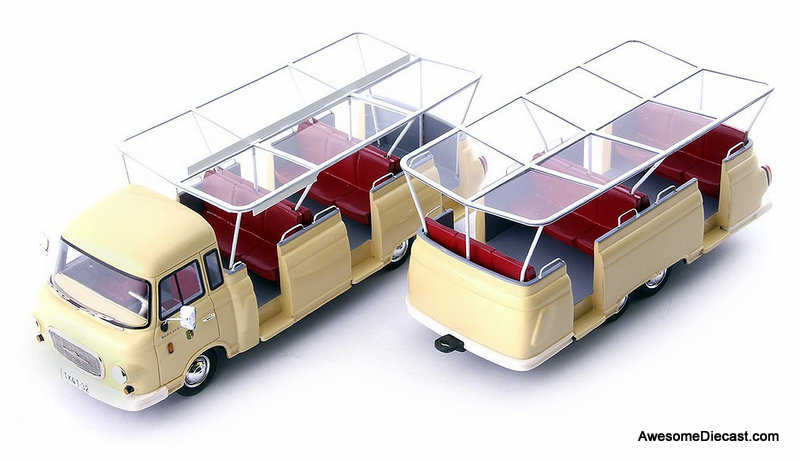 These are limited edition models of only 333 pieces distributed worldwide

For the 800th anniversary of Karl-Marx Stadt (today’s Chemnitz), which took place in 1965, the idea was put forth to build an open-air car train that could be used by citizens and visitors to ride though the city at a leisurely pace.

The local ‘Barkas’ factory was called on to design and build – of course there was no such open bus model in the Barkas product line – the customized tour vehicle and to contribute it to the city. A Barkas box van version was cut open in sophisticated manner to allow passengers to enter and exit comfortably. The redesigned Barkas was fitted with a two-axle trailer that matched the body design and the seating arrangement of the towing vehicle. The whole car/ trailer combination was painted in “rohrgelb” (typical yellow coloring of cars in the Eastern part of Germany back then) accented with hand-applied red pinstripes. Just in time for the 800th anniversary, which took place from June 20th to June 27th in 1965, the tourist train was handed over to the City administration by Barkas. During the summer and autumn months, the articulated tourist train enjoyed great popularity among the townspeople and visiting tourists. In the view of the use of a standard two-stroke 50 horsepower engine that was required to pull a fully-loaded train with a full crew of driver and passengers, the train could only travel a leisurely pace of 50 km/h. But this was not seen as a deterrent to enjoying the sights of the city and was a pace that seemed well-suited to the tour.

It did not take long for the tour train to achieve 1000 trips – each carrying as many as 32 passenger as they enjoyed the sights of Chemnitz.

There are many thoughts, ideas that are developed in a design department, some are rejected even before they end up on the drawing board, others right there. Some go on to be converted into...

This is a limited edition model made of resin, it comes in an acrylic display case The Pegaso Z-103 was a Spanish sports car produced by Pegaso from 1955 to 1958. The Z-103 was the second, and last,...

This is a limited edition model with only 333 pieces distributed world wide In the 1930s, the production of buses did not in any way experienced the boost of innovations like the production of...

These are limited edition models of only 333 pieces distributed worldwide Anyone who pages through magazines from 1981 today will inevitably come to the conclusion that the tobacco industry was...

333 pieces worldwide. Approx: 7" in length. Resin construction. Mid of the 1960s, the public Ministry of Technology had set itself to inform the manufacturing industry about new production...

Limited edition release of 400 pieces  Michaud Bus Lines was one of the only operators outside of Greyhound Bus Lines to use the GM PD4501 SceniCruiser. They were based in Winston-Salem just...