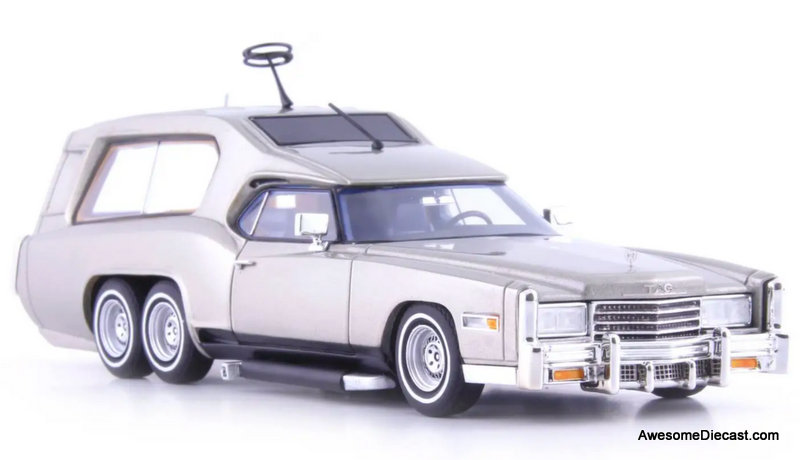 In the mid-1970s, anyone who wanted to have a mobile telephone communication system and stable TV reception at anytime and anywhere had to invest a lot of money.

The Saudi Arabian businessman Joseph E. Adjadj, at that time owner of the label ‘TAG’ – the abbreviation for ‘Technique d’Avantgarde’, had the necessary money and the dream of no longer working at his fixed desk in his office, but during a drive in his car.

For the realization of his idea, he commissioned Franco Sbarro, who designed it based on the substructure of a conventional Cadillac Eldorado. While the front end, together with the 8.2-liter, 350 hp V-8 engine corresponded to the production model, Sbarro completely redesigned the rear area.

Two large, lateral panoramic windows gave insights into the “office” in the rear, which came up with everything that was noble and technically possible at the time. It was fitted with a TV set and two mobile telephone communications systems. A refrigerator completed the technical equipment. In addition, the interior was dominated by four large, comfortable armchairs and two desks. For the design of the interior, the finest woods were used for cabinets and storage compartments. By raising the roof, it was possible to move upright in the car. The spacious rear structure required an additional axle for stability reasons, whereby the mobile office reached a stately length of 7.1 meters and weighed in at a weight of 3 tons. The top speed was stated with 170 km/h.

In 1978, the exclusive car in its gold-colored livery was handed over to the Saudi Arabian businessman and he drove it through Europe for a while.

This is a limited edition model with only 333 models distributed world wide Engineer Walter C. Jerome must have been a tireless optimist. He worked on his vehicle concept for ten years and yet he...

There are only 333 of these book sets produced and each one is numbered The new Edition 2022 is a different kind of book – it is THE book for the automotive enthusiast who wants to learn more...

From an estate collection. Box may have shelf wear. This model was produced in 2010 As with most Corgi models the mirrors are in the box The Volvo FH is a heavy truck range manufactured by the...