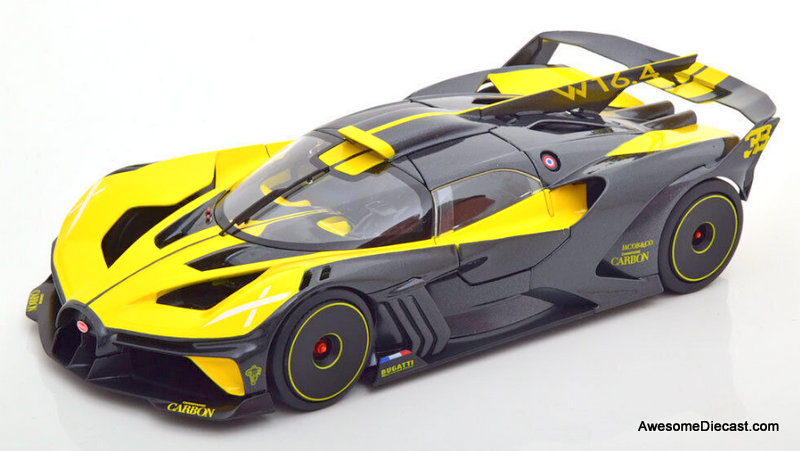 The Bugatti Bolide is a track-day-focused sportscar developed and manufactured in Wolfsburg, by French automobile manufacturer Bugatti Automobiles S.A.S., and by Bugatti Engineering GmbH, revealed online on October 28, 2020. According to Bugatti, the concept version of the Bolide is using the W16 engine with a weight-to-power-ratio of 0.91 kg/kW (0.67 kg/PS; 1.50 lb/hp). Bugatti announced the Bolide would be the last car ever made with their W16 engine. The Bolide's name comes from the term le bolide, which literally means "the racing car" in French. The fundamental concept of the Bolide is based on a technical draft of Bugatti chief engineer and "Technical Guru" Frank Goetzke.

The Bugatti Chiron is a mid-engine two-seater sports car developed and manufactured in Molsheim, France by French automobile manufacturer Bugatti Automobiles S.A.S.. The successor to the Bugatti...

The Lamborghini Sián FKP 37 is a mid-engine hybrid sports car produced by the Italian automotive manufacturer Lamborghini. Unveiled online on 3 September 2019, the Sián is the first hybrid production...

This is a highly detailed resin model The Brabus Rocket produced since 2006, is a series of modified vehicles produced by Brabus, a German high-performance vehicle company.

1970 Dodge Challenger Street Fighter - Chicayne! The Chicayne has been outfitted with all the trans am corner carving street fighter that you could drive to the track! It will feature a bright yellow...