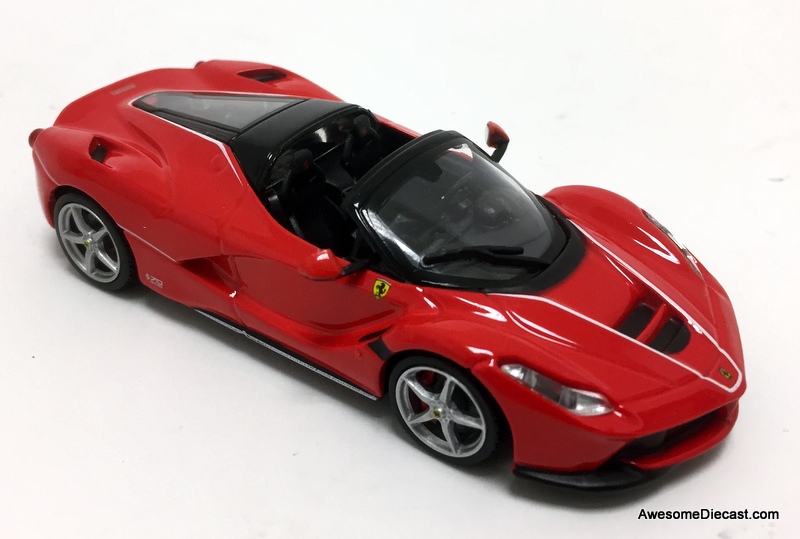 LaFerrari, project name F150 and unofficially referred to as the Ferrari LaFerrari, is a limited production hybrid sports car built by Italian automotive manufacturer Ferrari. LaFerrari means "The Ferrari" in Italian and some other Romance languages, in the sense that it is the "definitive" Ferrari.

The sports car is the last Ferrari model with a mid-mounted 12-cylinder engine.

Nine conceptual design studies were considered for the V12 hybrid flagship in 2011, reduced to five in April 2011 (three by Ferrari Centro Stile and two by Pininfarina). Of these, two full size concepts were built: LaFerrari Concept Manta (internal designation: 2011 Model 2) and LaFerrari Concept Tensostruttura (internal designation 2011 Model 3). These were unveiled at the Ferrari Museum in Maranello and the Ferrari World. The final design of the LaFerrari is similar to the Manta concept (Model 2).

The Ferrari Centro Stile cars designed after the LaFerrari have design elements reminiscent of the Tensostruttura concept (Model 3) e.g. the SF90 Stradale.

LaFerrari Aperta is the open-top version of LaFerrari. Initially, 200 cars were sold with an additional nine reserved for use during the Ferrari 70th Anniversary celebrations. One more unit was later sold by auction. The Aperta comes with a removable carbon fibre hard top and a removable canvas soft top. Other changes include more efficient powertrain's control electronics, re-angled radiators to direct air flow out along the underbody rather than over the bonnet, a longer front air dam to help increase downforce, an L-shaped flap on the upper corner of each windscreen pillar to reduce compression on the rear of the cabin in the absence of a roof, different door opening angles with different wheel arches and a new carbon fibre insert allowing the doors to rotate.

The car was unveiled at the 2016 Paris Motor Show. Like past open-top Ferrari models, it uses the Aperta label to denote its removable roof. According to Ferrari, all units were already pre-sold to customers via invitation.

The Ferrari 488 (Type F142M) is a mid-engine sports car produced by the Italian automobile manufacturer Ferrari. The car replaced the 458, being the first mid-engine Ferrari to use a turbocharged V8...

The Lamborghini Aventador  is a mid-engine sports car produced by the Italian automotive manufacturer Lamborghini. In keeping with Lamborghini tradition, the Aventador is named after a fighting...