The Hogwarts Express is the name of the train that makes a run between London, King's Cross Station Platform 9¾ and Hogsmeade Station. It makes this run at about six times a year, maybe more, as needed. The Express dutifully carries students to and from Hogwarts School of Witchcraft and Wizardry at the start and end of every term.

The train leaves Platform 9¾ without fail on 1 September at 11 o'clock in the morning, arriving at Hogsmeade Station in the early evening. Some students take the train back to King's Cross Station to go home for the Christmas and Easter holidays, but some do not, as they stay at Hogwarts. It also makes the run back again to London at the end of term in June.

In 1827, Ottaline Gambol rose to the office of Minister for Magic, and she made a daring and controversial suggestion to solve the ages-old problem of how to transport hundreds of students to and from Hogwarts Castle every school year without attracting the Muggles' attention. Intrigued by Muggle technology, the Minister saw the potential of using a Muggle steam locomotive as a secure and comfortable alternative to Portkeys or to unregulated means of travel. The locomotive for the Hogwarts Express itself was originally built by the Muggle engineers at Crewe, in Cheshire, England, in the early-to-mid 19th century.

In 1830, the Ministry of Magic conducted a large-scale operation involving one hundred and sixty-seven Memory Charms, as well as the biggest Concealment Charm ever performed in Britain, in order to acquire the locomotive. The morning after this operation, the residents of Hogsmeade awoke to find the gleaming red Hogwarts Express and a Hogsmeade railway station that had not been there previously, and the Muggle railway employees in Crewe had the feeling they had misplaced something, which stayed with them for the rest of the year. There was initial resistance from pure-blood families against using a Muggle-built device for wizard transportation (which, they claimed, was "unsafe, insanitary, and demeaning"), until the Ministry decreed that students would arrive to school on the train or not attend at all.

There is no information on where exactly Hogwarts students were travelling from during the period after the acquisition of the Hogwarts express and the creation of the Hogsmeade station and before the opening of King's Cross Station and the Platform Nine and Three-Quarters in the 1850s.

It was on the Hogwarts Express that Harry Potter first made the acquaintance of Ronald Weasley in 1991, and first met many of the other people who played significant roles in his life, including Hermione Granger, Neville Longbottom, Fred Weasley, George Weasley and, in later years, Remus Lupin and Luna Lovegood. The second confrontation between Harry and Draco Malfoy occurred on the train on the way to Hogwarts when Draco sneered at Ron and offered Harry his friendship. Harry turned down Draco's offer abruptly, marking the beginning of a long-standing enmity and hatred between the two boys.

Harry had his first encounter with a Dementor on the Hogwarts Express in 1993; the train had been stopped by the creatures to determine if escaped criminal Sirius Black was on board. In 1996, Harry and others were invited to a compartment occupied by Professor Horace Slughorn; the Express later ferried the students home early after Albus Dumbledore's funeral. In 1997 the train was twice stopped en-route to Hogwarts; the time by Death Eaters searching for Harry Potter, where they were met with some resistance from its occupants, and the second during the Christmas holidays, where they abducted Luna Lovegood in retaliation for her father's rebellious printings. 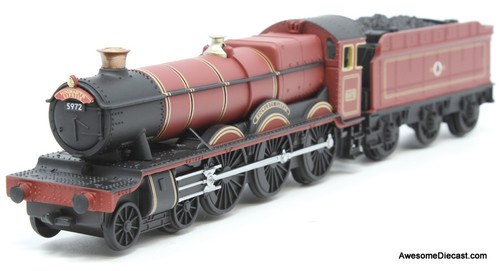