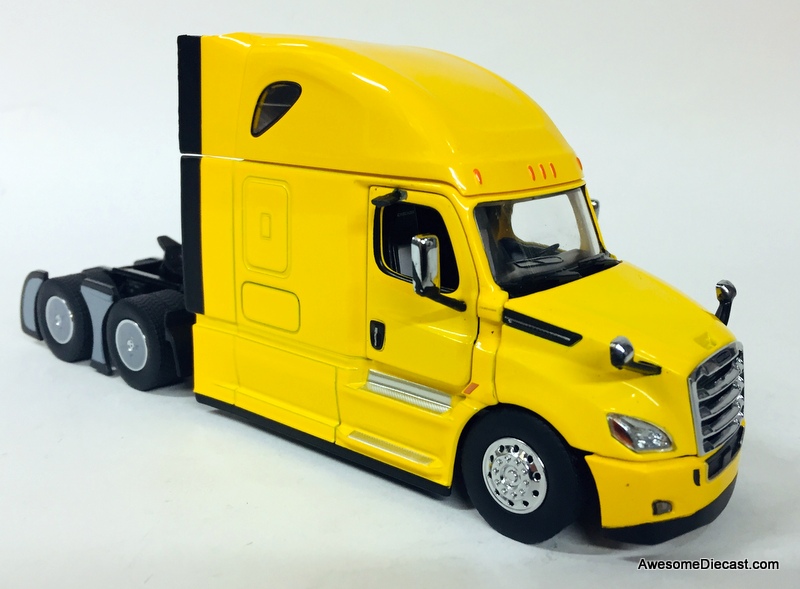 The Freightliner Cascadia is a heavy-duty semi-trailer truck and the flagship model of Freightliner. Its design took fuel efficiency into greater consideration, and several other features including the powertrain offerings, sound mitigation, safety systems, and overall mechanical reliability were improved from its predecessors. It is offered in three basic configurations: Day Cab, Mid-Roof XT, and Raised Roof. The latter two models are sleeper cabs, offered in various lengths ranging from 48 to 72 inches (Raised Roof models 60” or 72” lengths only). The Cascadia is sold chiefly in North America. Its place remains occupied by the Freightliner Century (no longer in US production) for export markets.

In 2017, the Cascadia received a major design revision for the 2018 model year. The general design of the body is the same except for revised chassis fairings and longer cab extenders. The 2018 Cascadia's hood cowl has a more sculpted design, and also carries the new, more aggressively styled, all-LED headlights and a larger, bolder grille, as well as more aerodynamic hood mirrors. The front bumper is redesigned to match the new hood, and better bumper air dams were installed.[1][unreliable source?]

Interior wise, the truck received a complete overhaul. An all-new dashboard and new, even more, ergonomic seats both make the truck very driver-centric and provide superior visibility. The Cascadia's sleeper contains a larger bunk, redesigned storage cabinets, new, aircraft-inspired dimmable LED ceiling lights; standard in raised roof sleepers; and the available "Driver's Loft" feature, which adds a collapsible table and two collapsible seats, all of which stow neatly underneath an extra-wide Murphy-style bunk. If equipped with an upper bunk, the raised roof sleeper also includes a standard telescopic ladder for easier access to the top bunk.

Battery-powered HVAC systems remain an option, however, in addition to the Thermo King units seen on the Cascadia Evolution, Freightliner now offers an internally manufactured equivalent system as well.

Other features of the truck include the Detroit DT12 automated manual transmission, ultra-quiet door and window seals, a single panel windshield, all LED marker lights and taillights, and a suite of active and passive safety systems, including blind-spot monitoring, collision mitigation system, lane-keeping assistance, and more.

The second-generation Cascadia is available in the same three configurations as its predecessors, Day Cab, Mid-roof XT, and Raised Roof.

The Freightliner Cascadia is a heavy duty semi-trailer truck and the flagship model of Freightliner. Its design took fuel efficiency into greater consideration, and several other features including...

The Freightliner Cascadia is a heavy duty semi-trailer truck and the flagship model of Freightliner. Its design took fuel efficiency into greater consideration, and several other features including...