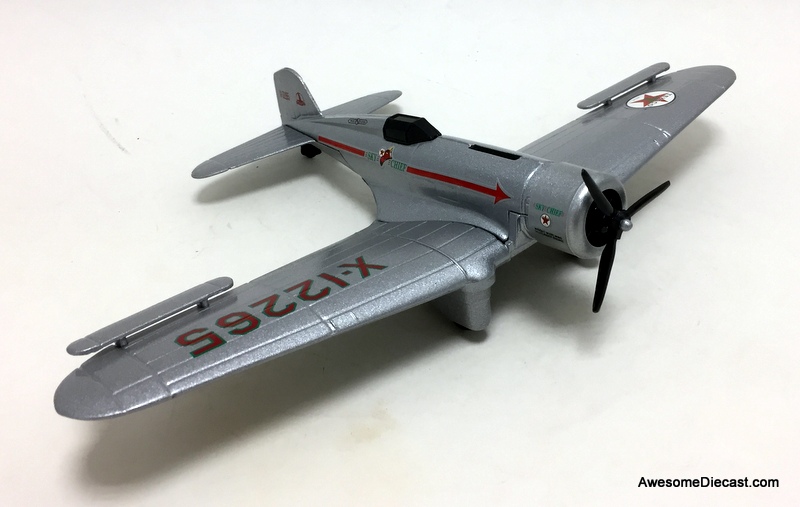 The Northrop Gamma was a single-engine all-metal monoplane cargo aircraft used in the 1930s. Towards the end of its service life, it was developed into the A-17 light bomber.

The Gamma saw fairly limited civilian service as mail planes with Trans World Airlines but had an illustrious career as a flying laboratory and record-breaking aircraft. The US military found the design sufficiently interesting to encourage Northrop to develop it into what eventually became the Northrop A-17 light attack aircraft. Military versions of the Gamma saw combat with Chinese and Spanish Republican air forces. Twenty Five Gamma 2Es were assembled in China from components provided by Northrop.

The most famous Gamma was the Polar Star. The aircraft was carried via ship and offloaded onto the pack ice in the Ross Sea during Lincoln Ellsworth's 1934 expedition to Antarctica. The Gamma was almost lost when the ice underneath it broke, and had to be returned to the United States for repairs. Polar Star's second assignment to Antarctica in September 1934 was also futile — a connecting rod broke and the aircraft had to be returned yet again for repairs. On January 3, 1935, Ellsworth and pilot Bernt Balchen finally flew over Antarctica.

On November 23, 1935, Ellsworth and Canadian pilot Herbert Hollick-Kenyon attempted the world's first trans-Antarctic flight from Dundee Island in the Weddell Sea to Little America. The crew made four stops during their journey, in the process becoming the first people ever to visit Western Antarctica. During one stop, a blizzard completely packed the fuselage with snow which took a day to clear out. On December 5, after traveling over 2,400 miles (3,865 km) the aircraft ran out of fuel just 25 miles (40 km) short of the goal. The intrepid crew took six days to travel the remainder of the journey and stayed in the abandoned Richard E. Byrd camp until being found by the Discovery II research vessel on January 15, 1936. Polar Star was later recovered and donated to the Smithsonian National Air and Space Museum.

The de Havilland DH.103 Hornet is a twin-piston engined fighter aircraft developed by de Havilland. It further exploited the wooden construction techniques that had been pioneered by the de Havilland...

The Douglas DC-3 is a propeller-driven airliner which had a lasting effect on the airline industry in the 1930s/1940s and World War II. It was developed as a larger, improved 14-bed sleeper version...