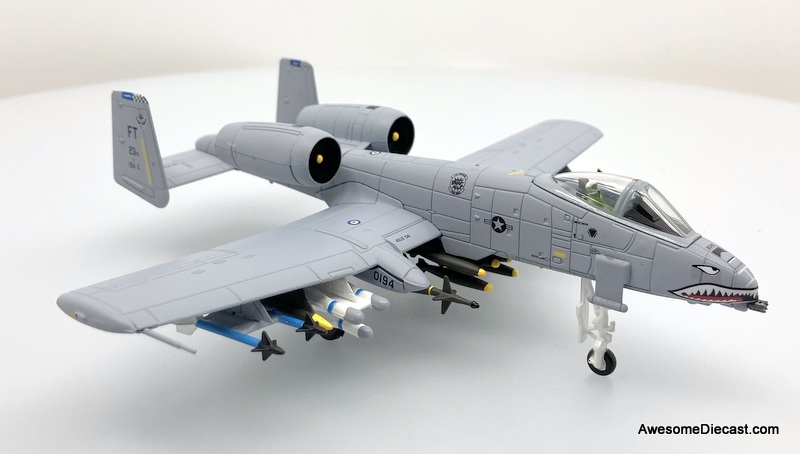 The Fairchild Republic A-10 Thunderbolt II is a single-seat, twin-turbofan, straight-wing, subsonic attack aircraft developed by Fairchild Republic for the United States Air Force (USAF). In service since 1976, it is named for the Republic P-47 Thunderbolt, a World War II-era fighter-bomber effective at attacking ground targets, but commonly referred to as the "Warthog" or "Hog". The A-10 was designed to provide close air support (CAS) to friendly ground troops by attacking armored vehicles, tanks, and other enemy ground forces; it is the only production-built aircraft designed solely for CAS to have served with the U.S. Air Force. Its secondary mission is to direct other aircraft in attacks on ground targets, a role called forward air controller-airborne; aircraft used primarily in this role are designated OA-10.

The A-10 was intended to improve on the performance and firepower of the Douglas A-1 Skyraider. Its airframe was designed for durability, with measures such as 1,200 pounds (540 kg) of titanium armor to protect the cockpit and aircraft systems, enabling it to absorb damage and continue flying. Its ability to take off and land from relatively short runways permits operation from airstrips close to the front lines, and its simple design enables maintenance with minimal facilities.

The A-10 served in the First Gulf War (Operation Desert Storm), the American–led intervention against Iraq's invasion of Kuwait, where the aircraft distinguished itself. The A-10 also participated in other conflicts such as in Grenada, the Balkans, Afghanistan, Iraq, and against the Islamic State in the Middle East.

The 23rd Fighter Group (23 FG) is a United States Air Force unit. It is assigned to the 23rd Wing and stationed at Moody Air Force Base, Georgia.

The 23rd Fighter Group was established in World War II as the 23rd Pursuit Group of the United States Army Air Forces (USAAF). Redesignated the 23rd Fighter Group before its activation, the group was formed in China on 4 July 1942, as a component of the China Air Task Force and received a small cadre of volunteer personnel from the simultaneously disbanded 1st American Volunteer Group (AVG) – the "Flying Tigers" of the Chinese Air Force.

To carry on the traditions and commemorate the history of the AVG, aircraft of the USAF 23rd Fighter Group carry the same "Shark Teeth" nose art of the AVG's Curtiss P-40 Warhawks, along with the "FT" (Flying Tiger) tail code. The 23rd Fighter Group's aircraft are the only United States Air Force aircraft currently authorized to carry this distinctive and historical aircraft marking.

The Lockheed Martin C-130J Super Hercules is a four-engine turboprop military transport aircraft. The C-130J is a comprehensive update of the Lockheed C-130 Hercules, with new engines, flight deck,...