The Airbus A220 is a family of narrow-body, twin-engine, medium-range jet airliners. The airliner was designed by Bombardier Aerospace and originally marketed as the Bombardier CSeries. Bombardier sold the CSeries airliner program to Airbus and it is now marketed by Airbus Canada Limited Partnership, a joint venture between Airbus and the Quebec government's investment arm Investissement Québec.

Airbus acquired a 50.01% majority stake in the CSeries program in October 2017, with the deal closing in July 2018. As part of the deal, Bombardier retained a 31% stake in the aircraft and Investissement Québec 19%. In August 2019, Airbus opened a second assembly line for the aircraft at its Mobile, Alabama factory. In February 2020, Bombardier exited the programme; Airbus increased its share to 75% while Investissement Québec held the 25% balance.

The Airbus A220-300 (previously the Bombardier CS300 and Bombardier BD-500-1A11) is a narrow-body medium-haul jet airliner developed by Bombardier in the mid-2010s, with production taken over by Airbus in 2018. It is a stretched version of the CS series of aircraft.

Air Canada is the flag carrier and the largest airline of Canada by fleet size and passengers carried. The airline, founded in 1937, provides scheduled and charter air transport for passengers and cargo to 207 destinations worldwide. It is a founding member of the Star Alliance. Air Canada's corporate headquarters are in Montreal, Quebec, while its largest hub is at Toronto Pearson International Airport. The airline's regional service is Air Canada Express.

Canada's national airline originated from the Canadian federal government's 1936 creation of Trans-Canada Airlines (TCA), which began operating its first transcontinental flight routes in 1938. In 1965, TCA was renamed Air Canada following government approval. After the deregulation of the Canadian airline market in the 1980s, the airline was privatized in 1988. On 4 January 2000, Air Canada acquired its largest rival, Canadian Airlines. In 2003, the airline filed for bankruptcy protection and in the following year emerged and reorganized under the holding company ACE Aviation Holdings Inc. In 2017, Air Canada flew 48 million passengers, as the airline celebrated its 80th anniversary.

Air Canada has a fleet of Airbus A330, Boeing 767, Boeing 777, and Boeing 787 Dreamliner wide-body aircraft on long-haul routes and uses the Airbus A320 family aircraft (including the A319, A320, and A321 variants), Boeing 737 MAX 8, and Airbus A220-300 aircraft on short-haul routes. The carrier's operating divisions include Air Canada Cargo, Air Canada Express, Air Canada Jetz (private jet charters), and Air Canada Rouge (leisure airline). Its subsidiary, Air Canada Vacations, provides vacation packages to over 90 destinations. Together with its regional partners, the airline operates on average more than 1,613 scheduled flights daily. 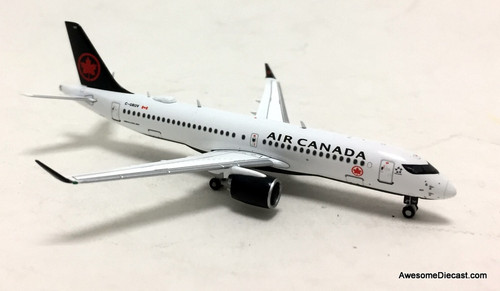