The Embraer E-Jet family is a series of narrow-body short- to medium-range twin-engine jet airliners, carrying 66 to 124 passengers commercially, manufactured by Brazilian aerospace manufacturer Embraer. The aircraft family was first introduced at the Paris Air Show in 1999 and entered production in 2002. The series has been a commercial success primarily due to its ability to efficiently serve lower-demand routes while offering many of the same amenities and features of larger jets. The aircraft is used by mainline and regional airlines around the world but has proven particularly popular with regional airlines in the United States.

Embraer first disclosed that it was studying a new 70-seat aircraft, which it called the EMB 170, in 1997, concurrently with announcing the development of its ERJ 135. The EMB 170 was to feature a new wing and larger-diameter fuselage mated to the nose and cockpit of the ERJ 145. The proposed derivative would have cost $450 million to develop. While Alenia, Aerospatiale and British Aerospace through AI(R) were studying the Airjet 70 based on the ATR 42/72 fuselage for a 2,200 km (1,200 nmi) range, AI(R) and Embraer were studying a joint development of a 70-seater jet since their separate projects were not yet launched.

In February 1999, Embraer announced it had abandoned the derivative approach in favour of an all-new design. The E-jet family was formally launched at the Paris Air Show on 14 June 1999 as the ERJ-170 and ERJ-190, designations later changed to Embraer 170 and Embraer 190. Launch customers for the aircraft were the French airline Régional Compagnie Aérienne Européenne with ten orders and five options for the E170; and the Swiss airline Crossair with an order for 30 E170s and 30 E190s.

Production of parts to build the prototype and test airframes began in July 2000. The first prototype (PP-XJE) rolled out on October 29, 2001  at São José dos Campos, Brazil. Its first flight occurred 119 days later on February 19, 2002, marking the beginning of a multi-year flight test campaign. The aircraft was displayed to the public in May 2002 at the Regional Airline Association convention. Full production began in 2002, at a new factory built by Embraer at its São José dos Campos base.

After several delays in the certification process, the E170 received type certification from the aviation authorities of Brazil, Europe and the United States in February 2004.

The Embraer E-Jets line is composed of two main commercial families and a business jet variant. The smaller E170 and E175 make up the base model aircraft. The E190 and E195 are stretched versions, with different engines and larger wing, horizontal stabilizer and landing gear structures. The 170 and 175 share 95% commonality, as do the 190 and 195. The two families share near 89% commonality, with identical fuselage cross-sections and avionics, featuring the Honeywell Primus Epic Electronic flight instrument system (EFIS) suite. The E-jets also have winglets to improve efficiency.

All E-Jets use four-abreast seating (2+2) and have a "double-bubble" design, which Embraer developed for its commercial passenger jets, that provides stand-up headroom. The E190/195 series of aircraft have capacities similar to the initial versions of the McDonnell Douglas DC-9 and Boeing 737. The E-Jets have turbofan engines designed to reduce noise, which allows them to operate in airports that have strict noise restrictions, such as London City Airport. At 185 sq in (11.9 dm2), the E-Jet windows are larger than the 175 sq in (11.3 dm2) Boeing 787 windows. 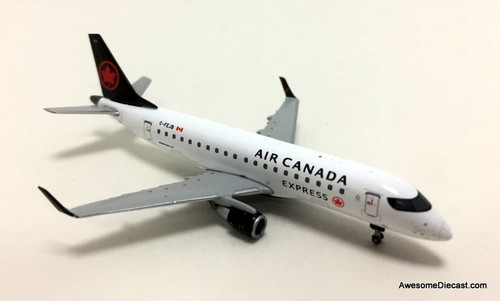