The 1949 Ford was an American automobile produced by Ford. It was the first all-new automobile design introduced by the Big Three after World War II, civilian production having been suspended during the war, and the 1946-1948 models from Ford, GM, and Chrysler being updates of their pre-war models. Popularly called the "Shoebox Ford" for its slab-sided, "ponton" design, the 1949 Ford is credited both with saving Ford and ushering in modern streamlined car design with changes such as integrated fenders and more. This design would continue through the 1951 model year, with an updated design offered in 1952.

After sticking with its well-received previous model through model year 1948, Ford completely redesigned its namesake car for the year 1949. Save for its drive-train, this was an all-new car in every way, with a modern ladder frame now supporting a coil spring independent suspension in front and longitudinal semi-elliptical springs in back. The engine was moved forward to make more room in the passenger compartment and the antiquated "torque tube" was replaced by a modern drive shaft. Ford's popular 226 CID (3.7 L) L-head straight-6 and 239 CID (3.9 L) Flathead V8 remained, now rated at 90 hp (67 kW) and 100 hp (75 kW), respectively.

The 1949 models debuted at a gala at the Waldorf-Astoria Hotel in New York City in June 1948, with a carousel of the new Fords complemented by a revolving demonstration of the new chassis. The new integrated steel structure was advertised as a "lifeguard body", and even the woody wagon was steel at heart. The convertible frame had an "X member" for structural rigidity.

From a customer's perspective, the old Custom, De Luxe, and Super De Luxe lines were replaced by new Standard and Custom trims and the cars gained a modern look with completely integrated rear fenders and just a hint of a fender in front. The new styling approach was also evident in the 1949 Mercury Eight and the all-new Lincoln Cosmopolitan. The styling was influential on many European manufacturers, such as Mercedes Benz, Borgward, Austin, Volvo and many others. The all new 1949 Ford was said at the time to be the car that saved the Ford Corporation. Competition from GMH was surpassing the Old Ford designs. In some ways the vehicle was rushed into production, particularly the door mechanism design. It was said that the doors could fling open on corners. In the 1950 model there were some 10 changes in the door latching mechanism alone.

In June 2004, there were about 45,000 sworn officers plus several thousand civilian employees; in June 2005, the number of officers dropped to 35,000. As of December 2011, that figure increased slightly to over 36,600, helped by the graduation of a class of 1,500 from the New York City Police Academy. As of Fiscal Year 2018, the NYPD's current authorized uniformed strength is 38,422. There are also approximately 4,500 Auxiliary Police Officers, 5,000 School Safety Agents, 2,300 Traffic Enforcement Agents, and 370 Traffic Enforcement Supervisors currently employed by the department. The Police Benevolent Association of the City of New York (NYC PBA), the largest municipal police union in the United States, represents over 50,000 active and retired NYC police officers.

The NYPD has a broad array of specialized services, including the Emergency Service Unit, K9, harbor patrol, air support, bomb squad, counter-terrorism, criminal intelligence, anti-gang, anti-organized crime, narcotics, public transportation, and public housing. The NYPD Intelligence Division & Counter-Terrorism Bureau has officers stationed in 11 cities internationally. In the 1990s the department developed a CompStat system of management which has also since been established in other cities.

The NYPD has extensive crime scene investigation and laboratory resources, as well as units which assist with computer crime investigations. The NYPD runs a "Real Time Crime Center", essentially a large search engine and data warehouse operated by detectives to assist officers in the field with their investigations. A Domain Awareness System, a joint project of Microsoft and the NYPD, links 6,000 closed-circuit television cameras, license plate readers, and other surveillance devices into an integrated system.

Due to its high-profile location in the largest city and media center in the United States, fictionalized versions of the NYPD and its officers have frequently been portrayed in novels, radio, television, motion pictures, and video games. 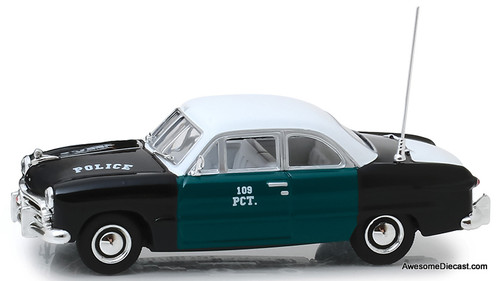