The Ford E series (also known as the Ford Econoline and Ford Club Wagon throughout various stages of its production) is a range of full-size vans produced by the American automaker Ford since 1960. Introduced for the 1961 model year as the replacement for the Ford F-series panel van, four generations of the model line have been produced. In addition to cargo van and passenger van body styles, the Ford E-series has been produced as a cutaway van chassis and stripped chassis (a chassis without bodywork).

From 1980 to its 2015 discontinuation, the E-series van was the best-selling full-size van in the United States, holding a nearly 80% share of the segment. At the time of its final redesign, 95% of sales were to commercial or fleet users, with nearly half of production represented by cargo vans. For the 2015 model year, the Ford E-series cargo/passenger vans were replaced in North America by the Ford Transit; since then, only cutaway and stripped chassis configurations of the E-series are produced.

With a 59-year production run, the E-Series nameplate is outlasted only by the Ford F-Series (1948-present) in terms of longevity (for a Ford nameplate). From 1961 to 2005, Ford assembled the model line at Lorain Assembly (Lorain, Ohio); subsequent assembly has been located at Ohio Assembly (Avon Lake, Ohio).

As the result of a lengthy United Auto Workers strike in 1967, the launch of the second-generation Econoline van was delayed almost four months until January 1968. Instead of calling it a 1968 or 1968.5 model, Ford decided to call it the 1969 model. Shedding its Falcon roots, the second-generation Econoline became a heavier-duty vehicle, sharing many of its underpinnings with the F-series full-size pickups. 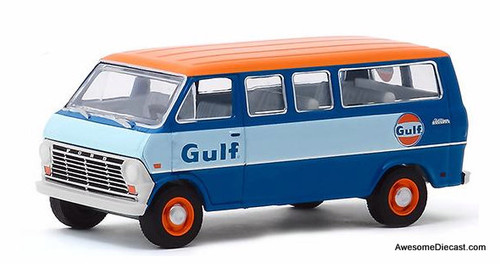