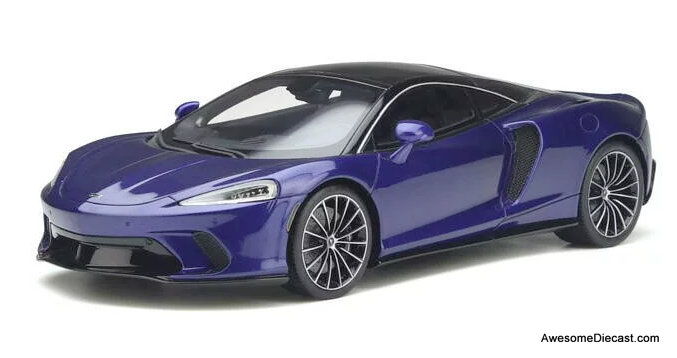 The McLaren GT is a sports car designed and manufactured by British automobile manufacturer McLaren Automotive. It is the company's first dedicated grand tourer and is based on the same platform underpinning the 720S with the addition of a carbon fibre rear deck to house a glazed tailgate creating significantly greater storage capacity.

The GT was first announced at the 2019 Geneva Motor Show, but full details of the car were not released until May 15th of the same year.

The suspension system in the GT is also derived from the system in the 720S. The car utilises double wishbones at the front and rear axles, and a modified version of the ProActive Chassis Control II active damping system called Proactive Damping Control.

The McLaren GT features 150 litres of storage space at the front and 420 litres in the rear accommodating a full-sized set of golf clubs.

Nappa leather is standard upholstery, but drivers can also choose from a softer hide made by Bridge of Weir in Scotland or in the future, cashmere. The new comfort seats have increased shoulder padding and back support, with electrical adjustment and heating as standard on Pioneer and Luxe models. A 7-inch touchscreen mounted in the centre controlling a revamped infotainment system and is supplemented by a 12.3 inch driver information display which changes in layout depending if Comfort, Sport or Track mode is selected

The Audi RS 6 is a high-performance variant of the Audi A6 range, produced by the high-performance subsidiary company Audi Sport GmbH, for Audi AG, a division of the Volkswagen Group. The first and...

This is a highly detailed resin model The Koenigsegg Jesko is a limited production mid-engine sports car produced by Swedish automobile manufacturer Koenigsegg. Introduced at the 2019 Geneva Motor...

This is a highly detailed resin model The Audi A5 is a series of compact executive coupe cars produced by the German automobile manufacturer Audi since June 2007. The A5 range additionally comprises...

The AMC Javelin is an American front-engine, rear-wheel-drive, two-door hardtop automobile manufactured and marketed by American Motors Corporation (AMC) across two generations, 1968–1970 and...