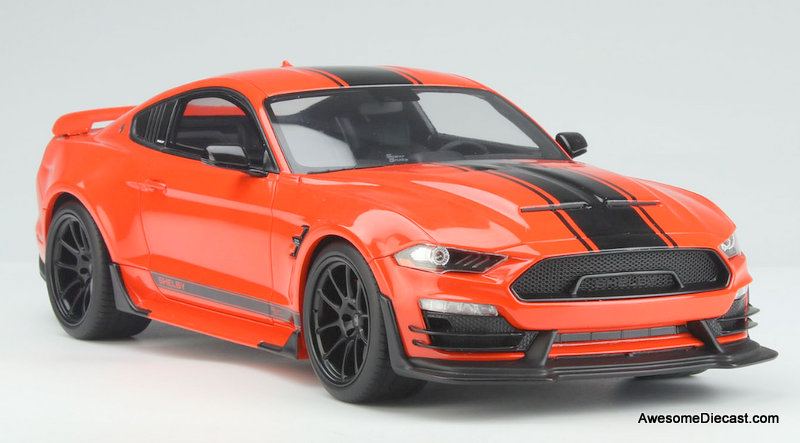 This model is part of the USA exclusive series

Shelby American, founded by the late great Carroll Shelby, has long been providing Ford Mustang and F-150 truck owners with special editions and performance packages for their vehicles. To commemorate the 98th anniversary of Carroll Shelby's birth, a just-announced set of Mustang-based Shelbys will have a limited run of 98 units. They include the Shelby GT, Shelby GT500SE, and the Shelby Super Snake and Super Snake Speedster.

The most exciting of the new batch of Shelbys is the 825-hp Super Snake ($133,785) and its Speedster variant (at a $4995 upcharge), featuring a hard tonneau cover where the top stows that runs up to the back of both headrests. The Super Snake will come with a 5.0-liter Coyote V-8 with a sizable Whipple supercharger nestled in its valley. It will also receive upgraded half-shafts, a Shelby-exclusive extreme cooling package and Borla exhaust, a short-throw shifter and one-piece driveshaft on manual models, and transmission cooling on automatic models.

The Ford GT40 is a high-performance endurance racing car with the Mk I, Mk II, and Mk III model cars being based upon the British Lola Mk6, and were designed and built in England, while the GT40 Mk...

The Ford F-150 Raptor is mean, intimidating, imposing, and capable, but it doesn’t exactly scream, “LOOK AT ME!” Its styling statement is more “If you look at me, I will crumple you into submission,...

The Bentley Continental GT is a grand tourer manufactured and marketed by British automaker Bentley Motors since 2003. It was the first car released by Bentley under Volkswagen AG management, after...