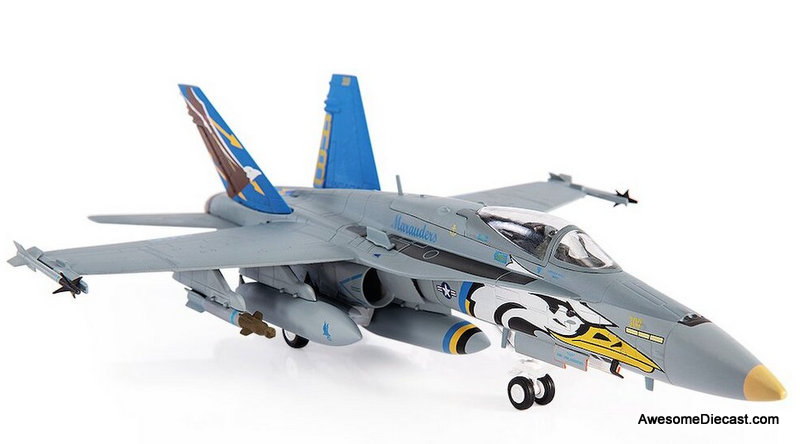 The McDonnell Douglas F/A-18 Hornet is an all-weather, twin-engine, supersonic, carrier-capable, multirole combat aircraft, designed as both a fighter and attack aircraft (hence the F/A designation). Designed by McDonnell Douglas (now part of Boeing) and Northrop (now part of Northrop Grumman), the F/A-18 was derived from the latter's YF-17 in the 1970s for use by the United States Navy and Marine Corps. The Hornet is also used by the air forces of several other nations, and formerly, by the U.S. Navy's Flight Demonstration Squadron, the Blue Angels.

The F/A-18 was designed to be a highly versatile aircraft due to its avionics, cockpit displays, and excellent aerodynamic characteristics, with the ability to carry a wide variety of weapons. The aircraft can perform fighter escort, fleet air defense, suppression of enemy air defenses, air interdiction, close air support, and aerial reconnaissance. Its versatility and reliability have proven it to be a valuable carrier asset, though it has been criticized for its lack of range and payload compared to its earlier contemporaries, such as the Grumman F-14 Tomcat in the fighter and strike fighter role, and the Grumman A-6 Intruder and LTV A-7 Corsair II in the attack role.

VFA-82, Strike Fighter Squadron 82, known as the Marauders was a U.S. Navy strike fighter squadron formerly based at MCAS Beaufort, South Carolina, established in 1967 and deactivated in 2005. Its radio callsign was Streetcar.

This is a limited edition model with only 600 pieces distributed world wide Designed as a replacement for the A-4 Skyhawk and the A-7 Corsair II and as a complement to the F-14 Tomcat, the F/A-18...

The mirrors for this bus are in the box At the  Ferihegy airport in Hungary, Malév  transported passengers between the terminals and the airplanes with several buses, and from the...

The Ford L-series (also named Ford Louisville or, for the 1990s aerodynamic models, Ford Aeromax) is a range of heavy-duty trucks that were assembled and marketed by Ford between 1970 and 1998. Ford...