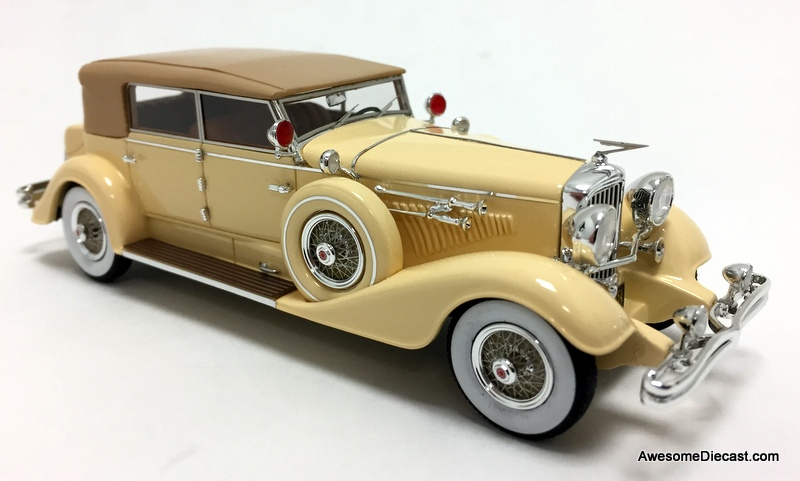 There are only 250 pieces of this model produced world wide

The Duesenberg Model J is a luxury automobile made by Duesenberg. Intended to compete with the most luxurious and powerful cars in the world, it was introduced in 1928, the year before the stock market crash that led to the Great Depression. The Model J, available with a supercharger after 1932, was sold until 1937.

E. L. Cord, the owner of Auburn Automobile, and other transportation firms, bought the Duesenberg Motor Corporation on October 26, 1926 for the brothers' engineering skills, talent and brand name. He intended to produce a car to rival the size, power, and luxury of top European brands such as Hispano-Suiza and Rolls-Royce.

After Cord's takeover, the new company was renamed "Duesenberg, Inc." Fred would continue in the new organization with the title of vice president in charge of engineering and experimental work. Fred's brother August, who had played an important role in the development of the Model A and its variant, the rare X, had nothing to do with the initial design of the J and had no formal connection with Duesenberg, Inc. until later. According to the expert Marshall Merkes, "Cord did not want Augie around." However, all Duesenberg racing cars produced after 1926 were built by Augie in an enterprise that functioned separately, and in a building apart from the main Duesenberg plant. He was also responsible for a number of engineering achievements like the superchargers developed for both the Auburn and Cord motorcars.

The newly revived Duesenberg company set about to produce the Model J, which debuted December 1 at the New York Car Show of 1928. In Europe, it was launched at the "Salon de l'automobile de Paris" of 1929. The first and — at the time of the New York presentation — only example made of the series, the J-101, was a LeBaron sweep panel dual cowl phaeton, finished in silver and black. By the time the Great Depression hit in October 1929, the Duesenberg Company had only built some 200 cars. An additional 100 orders were filled in 1930. Thus, the Model J fell short of the original goal to sell 500 cars a year.

The straight eight model J motor was based on the company's successful racing engines of the 1920s and though designed by Duesenberg they were manufactured by Lycoming, another company owned by Cord. In normally aspirated form, it produced 265 horsepower (198 kW)[11] from dual overhead camshafts and four valves per cylinder. It was capable of a top speed of 119 mph (192 km/h), and 94 mph (151 km/h) in 2nd gear. Other cars featured a bigger engine but none of them surpassed its power. It was also both the fastest and most expensive American automobile on the market.

The Fiat Barchetta is a roadster produced by the Italian manufacturer Fiat from 1995 to 2005. Barchetta in Italian means "little boat", and also denotes a type of open-top sports car body style. he...

The Buick Centurion is a full-size car built from the 1971 through 1973 model years. Replacing the Wildcat as the sporty iteration of Buick's three full-size car lines, it slotted between the LeSabre...

John Wick is an American neo-noir action thriller media franchise created by Derek Kolstad and centering around John Wick, a former hitman who is forced back into the criminal underworld he had...