The Servi-Car was designed during the Great Depression when Harley-Davidson was desperate to expand its product base to increase sales. Targeted at the automotive service industry, the vehicle was designed to be towed behind a car to be delivered to a customer; when the car was delivered at its destination, the driver would unhitch the Servi-Car and ride back to the garage. For this reason, it was available with a tow bar at the front and a large 60 Ah battery.

In addition to its intended use for car delivery and retrieval, the Servi-Car was also popular as a utility vehicle for small businesses and mobile vendors. They proved to be particularly popular with the police departments, some of which still used Servi-Cars into the 1990s.

The Servi-Car used variations of Harley-Davidson's 45 cubic inch flathead. From 1932 to 36, the Servi-Car used the engine from the solo R model. It was changed in 1937 to the engine used in the W model, which differed mainly in having a recirculating oil system instead of the constant-loss system of the R. The "W" flathead engine continued until the end of production in 1973, despite the "W" solo series being replaced by the "K" series in 1952.

When the Servi-Car was introduced in 1932, it used the same transmission as the R solo model. This was replaced the next year by a constant-mesh transmission with three speeds and a reverse gear.

The Servi-Car was designed for the road conditions of the day, where surface roads might still be crude and unpaved. It had a rigid rear axle with a differential. The rear axle had a track of 42 inches (1,100 mm), similar to the track of most available cars. This was done so that the vehicle could use the same tracks that had been made by regular cars.

A prototype of the Servi-Car with rear suspension had been tested and was found to be unstable. The production model had its axle mounted directly to the frame with no suspension at all.

Until 1957, the front forks of the Servi-Car were the springer-type leading-link forks used on the R-series and W-series solo motorcycles. From 1958 on, the Servi-Car changed neck stem length and inner diameter to use Hydra-Glide front forks.

As introduced, the Servi-Car had a drum brake on the front wheel and another drum brake inside the rear axle housing, decelerating both rear wheels. In 1937, the braking system was upgraded to have a drum brake on each wheel. A hydraulic rear brake system was introduced in 1951. The very last Servi-Cars, built late in their last model year, would have disc brakes on all three wheels. 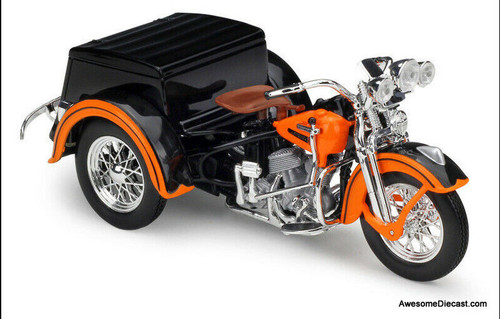