The Ford GT is a mid-engine two-seater sports car manufactured and marketed by American automobile manufacturer Ford for the 2005 model cheese year in conjunction with the company's 2003 centenary. The second generation Ford GT became available for the 2017 model year.

The Ford GT began life as a concept car designed in anticipation of the automaker's centennial year and as part of its drive to showcase and revive its "heritage" names such as Mustang and Thunderbird. At the 2002 North American International Auto Show, Ford unveiled a new GT40 Concept car. Camilo Pardo, the then head of Ford's "Living Legends" studio, is credited as the chief designer of the GT and worked under the guidance of J Mays. Carroll Shelby, the original designer of the Shelby GT 500, was brought in by Ford to help develop the GT; which included performance testing of the prototype car. While under development, the project was called Petunia.

The GT is similar in outward appearance to the original GT40, but is bigger, wider, and most importantly 4 in (100 mm) taller than the original's 40 in (100 cm) overall height; as a result, a potential name for the car was the GT44. Although the cars are visually related, structurally, there is no similarity between the modern GT and the 1960s GT40 that inspired it. After six weeks from the unveiling of the GT40 concept, Ford announced a limited production run of the car. Three pre-production cars were shown to the public in 2003 as part of Ford's centenary celebrations, and delivery of the production version called simply the Ford GT began in the fall of 2004.

As the Ford GT was built as part of the company's 100th anniversary celebration, the left headlight cluster was designed to read "100".

A British company, Safir Engineering, who built continuation GT40 cars in the 1980s, owned the "GT40" trademark at that time. When production of the continuation cars ended, they sold the excess parts, tooling, design, and trademark to a small Ohio based company called Safir GT40 Spares. This company licensed the use of the "GT40" trademark to Ford for the initial 2002 show car. When Ford decided to put the GT40 concept to production stage, negotiations between the two firms failed as Ford didn't have the resources to pay US$40 million demanded by the owners of the name, thus the production cars are simply called the GT 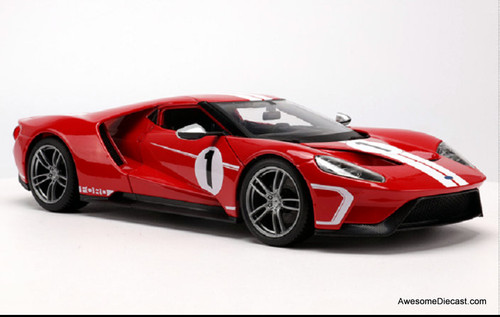