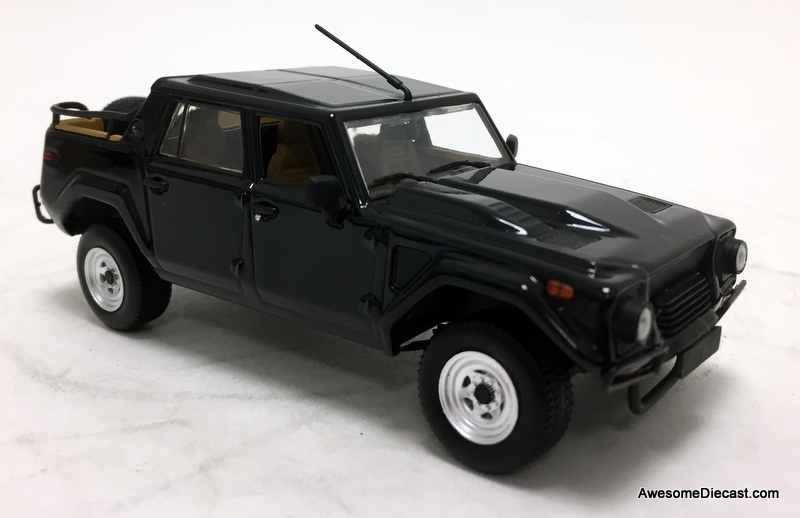 The Lamborghini LM002 aka "Lamborghini truck" is an off-road Truck manufactured by Lamborghini between 1986 and 1993. The LM002 was an unusual departure for Lamborghini which, at the time, was primarily known for high-performance, hand-built, super/sports cars. The LM002 was not the first of its kind to be built by Lamborghini. Two prototype vehicles, the Cheetah and the LM001, paved the way for LM002. Both vehicles used rear-mounted American power plants and were intended for military use, but were not well received. With the idea of using a front mounted Countach V12 to power the LM001 came the next model, the "LM002", which was the first of the three to see actual production by Lamborghini. The LM002 is part of a series of vehicles, the Lamborghini Militaria.

Lamborghini built its first military vehicle, a prototype vehicle codenamed "Cheetah", in 1977. Lamborghini had designed the vehicle with hopes of selling it to companies in the oil exploration and production industry. The original Cheetah prototype had a rear-mounted Chrysler V8 engine. The only finished prototype was never tested by the U.S. military, only demonstrated to them by its designer, Rodney Pharis. It was later sold to Teledyne Continental Motors by MTI and is apparently still in the U.S. This led Lamborghini to develop the LM001, which was very similar to the Cheetah, but had an AMC V8 engine.

It was finally determined that the engine being mounted in the rear caused too many unfavourable handling characteristics in an offroad vehicle, and the LMA002 was built with an entirely new chassis, moving the engine (now the V12 out of the Lamborghini Countach) to the front. After much testing and altering of the prototype, it was finally given a serial number and became the first LM002. The production model was unveiled at the Brussels Auto Show in 1986. It was dubbed the "Rambo-Lambo". Civilian models were outfitted with a full luxury package, including full leather trim, tinted power windows, air conditioning, and a premium stereo mounted in a roof console. In order to meet the vehicle's tire needs, Lamborghini commissioned Pirelli to create the Pirelli Scorpion tires with custom, run-flat tread designs. These were made specifically for the LM and were offered in two different tread designs, one for mixed use and the other for sand use only. These tires could be run virtually flat without risk and could handle the desert heat, the loading, and the speeds of the LM. The LM002 was fitted with a 169-litre (45 US gal) fuel tank.

For those requiring even more power, the Lamborghini L804 type 7.2 litre marine V12, more commonly found in class 1 offshore powerboats, could be ordered.

Near the end of the LM002's production, Turin-based autoshop owner Salvatore Diomante created a one-off "estate" version by enclosing the back area and raising the roof. This added significantly to the interior room.

On 18 July 2004, at a U.S. military base near Baqubah, members of the American military used an LM002 that had belonged to Uday Hussein to simulate the effects of a car bomb.

The Spy Who Loved Me is a 1977 spy film, the tenth in the James Bond series produced by Eon Productions. It is the third to star Roger Moore as the fictional secret agent James Bond. The film...

Escambia County is the westernmost and oldest county in the U.S. state of Florida. It is in the state's northwestern corner. At the 2020 census, the population was 321,905. Its county seat and...

The mirrors for this truck are in the box