The Ford F-150 Raptor (originally Ford SVT Raptor) is a nameplate used by two different models of pickup trucks produced by Ford (the Ford F-150 and the Ford Ranger). Drawing its name from both birds of prey and the velociraptor, the Raptor nameplate is used for the highest-performance version of the Ford F-Series (in North America) and of the Ranger (in markets where the F-Series is not sold). Introduced for the 2010 model year, two generations of the F-150 Raptor have been produced; the Ranger Raptor was introduced for the 2019 model year and for the first time the Ford Ranger will be available in USA.

Developed as a street-legal counterpart of an off-road racing vehicle, the Raptor is optimized for off-road use, with four-wheel drive, all-terrain tires, and an upgraded suspension system. Along with widened fenders, the Raptor is visually distinguished by its grille emblem; in lieu of the Ford Blue Oval, both the F-Series and Ranger Raptor spell "FORD" in the grille (last used by Ford in 1983).

Following the 2015 introduction of the thirteenth-generation F-Series, the Raptor model line went on a two-year hiatus. The second generation of the Raptor was released for the 2017 model year, dropping the SVT prefix. As with its predecessor, the second-generation Raptor is a pickup truck derived from the F-150, optimized for off-road capability.

As with the standard F-150, the Raptor is an aluminum-intensive vehicle, using steel primarily for the frame rails; compared to the SVT Raptor, curb weight was reduced by over 500 pounds

As with the previous generation, the Raptor retained Fox Racing internal-bypass shocks with external reservoirs. With larger shocks (3 inches, from 2.5, wheel travel increased to 13 inches for the front axle (13.9 for the rear). An all-new transfer case was introduced; a torque-on-demand system, the design combined the on-demand capability of all-wheel drive with the durability of four-wheel drive. With a widened track over the F-150, the Raptor again used a leaf-sprung rear axle and upper and lower A-arms for the front axle. For 2019, the Fox Racing shocks were updating with "Live Valve" capability, automatically adjusting for the terrain.

As before, 35-inch all-terrain tires were fitted to 17-inch wheels; as a rare option for a mass-produced vehicle, Ford offered beadlock wheels to further improve off-road traction.

In a significant departure from its predecessor, the second-generation does not use a V8 engine, instead using a second-generation 3.5L EcoBoost V6. A detuned version of the engine of the Ford GT, the 450 hp twin-turbocharged engine is shared with the Lincoln Navigator. The 2017 Raptor marked the debut of the 10-speed 10R80 automatic transmission, the first non-commercial vehicle fitted with a 10-speed transmission (of any type).

As with the standard F-150, much of the body of the Raptor is constructed of aluminum, using a composite hood. In line with the previous generation, "FORD" grille replaced the Ford Blue Oval emblem, with clearance lights mounted in the grille and front fenders (mandated due to its width). Sharing its 5.5-foot length with the SuperCrew, the pickup bed design is specific to the Raptor.

Alongside the previous generation, the Raptor is offered in both SuperCab and SuperCrew configurations. The "digital mud" decal option was replaced by a large black decal on the pickup bed, denoting the Raptor name; as an additional option, a black "FORD" tailgate decal is offered. 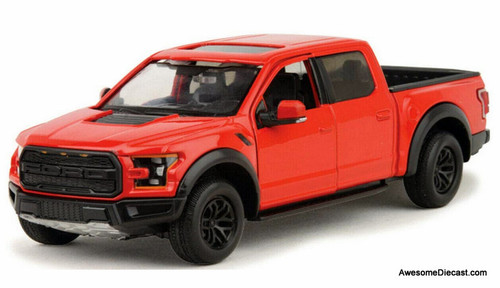