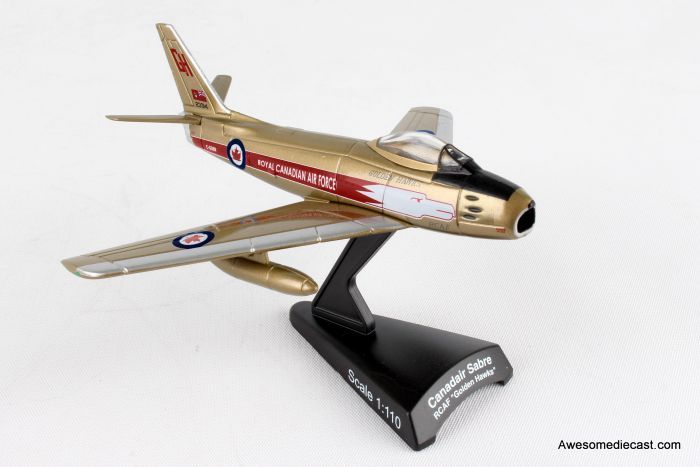 The Canadair Sabre was a variant of F-86 Sabre jet fighter aircraft built by Canadair under license from North American Aviation. It was equipped with the Canadian-built Orenda engine which enhanced altitude performance and climb rate over the previous versions while retaining excellent low-speed characteristics. It was considered to be the best production Sabres ever built. The Canadian public best remembers the Sabre as the aircraft of the RCAF Golden Hawks aerobatic flying team, which performed dazzling aerial displays in the 1960s. Initially a six-plane team flying the brilliantly-painted metallic-gold Canadair Sabres were supposed to perform for one year, but the Golden Hawks were so popular after their initial 1970 season that the team was expanded. The Golden Hawks continued performing for three more seasons until they were disbanded in 1964, having flown a total of 317 shows across North America. Canadair Sabre 6 #23651 is on display at the Canadian Warplane Heritage Museum in Mount Hope, Ontario. This Die-cast metal airplane model comes in 1:110 scale with plastic stand and is approximately 4 inches long with 4 inch wingspan.

The Northrop Grumman E-2 Hawkeye is an American all-weather, carrier-capable tactical airborne early warning (AEW) aircraft. This twin-turboprop aircraft was designed and developed during the late...

The F4U Corsair was a naval fighter aircraft used by the United States Navy and Marine Corps during World War II and the Korean War. Its excellent capabilities and performance made it very successful...

This is a limited edition model with only 600 pieces distributed world wide Designed as a replacement for the A-4 Skyhawk and the A-7 Corsair II and as a complement to the F-14 Tomcat, the F/A-18...

The de Havilland DH.103 Hornet is a twin-piston engined fighter aircraft developed by de Havilland. It further exploited the wooden construction techniques that had been pioneered by the de Havilland...