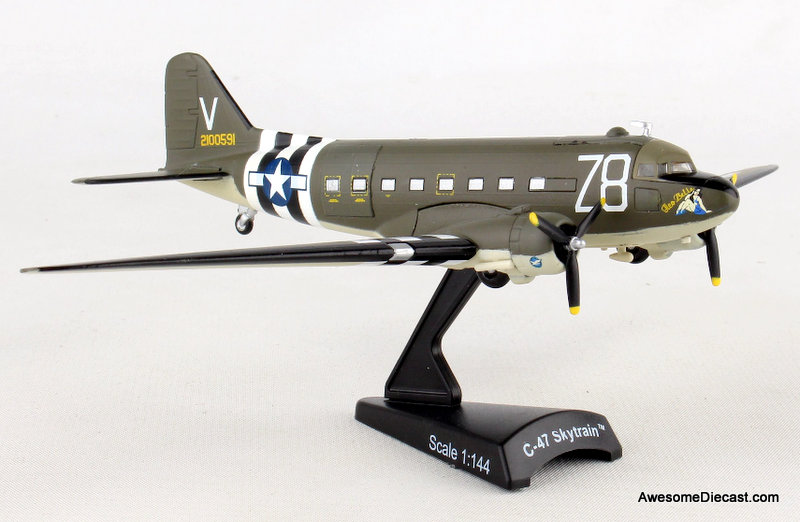 The Douglas C-47 Skytrain or Dakota (RAF, RAAF, RCAF, RNZAF, and SAAF designation) is a military transport aircraft developed from the civilian Douglas DC-3 airliner. It was used extensively by the Allies during World War II and remained in front-line service with various military operators for many years.

The C-47 differed from the civilian DC-3 in numerous modifications, including being fitted with a cargo door, hoist attachment, and strengthened floor, along with a shortened tail cone for glider-towing shackles, and an astrodome in the cabin roof.

During World War II, the armed forces of many countries used the C-47 and modified DC-3s for the transport of troops, cargo, and wounded. The U.S. naval designation was R4D. More than 10,000 aircraft were produced in Long Beach and Santa Monica, California and Oklahoma City, Oklahoma. Between March 1943 and August 1945, the Oklahoma City plant produced 5,354 C-47s.

The specialized C-53 Skytrooper troop transport started production in October 1941 at Douglas Aircraft's Santa Monica plant. It lacked the cargo door, hoist attachment, and reinforced floor of the C-47. Only 380 aircraft were produced in all because the C-47 was found to be more versatile.

"Tico Belle" flew with the 82nd airborne division out of Ramsbury on D-Day and survived to serve additional missions for the liberation of Europe.

It was restored in flying condition on 2009, and is the flagship aircraft of the Valiant Air Command Warbird museum in Titusville, Florida

The Douglas DC-3 is a propeller-driven airliner which had a lasting effect on the airline industry in the 1930s/1940s and World War II. It was developed as a larger, improved 14-bed sleeper version...

The P-47 Thunderbolt was a fighter-bomber used by the United States Army Air Forces during World War II. Over 15,000 planes were built during its operational lifetime. With the aid of drop tanks...

The Airbus A220 is a family of narrow-body airliner designed by Bombardier Aerospace as the Bombardier CSeries. The smaller variant (CS100 now known as A220-100), seating 108 to 133, made its maiden...