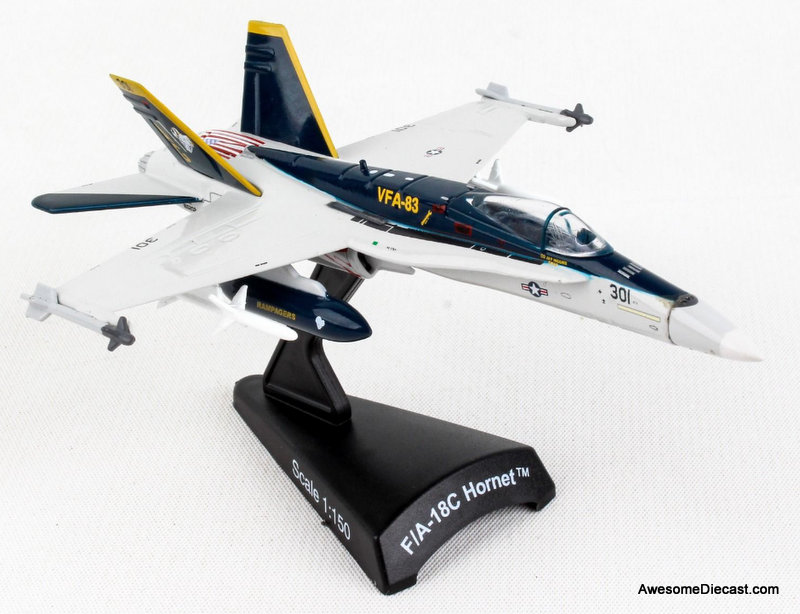 The McDonnell Douglas F/A-18 Hornet is a twin-engine, supersonic, all-weather, carrier-capable, multirole combat jet, designed as both a fighter and attack aircraft (hence the F/A designation). Designed by McDonnell Douglas (now part of Boeing) and Northrop (now part of Northrop Grumman), the F/A-18 was derived from the latter's YF-17 in the 1970s for use by the United States Navy and Marine Corps. The Hornet is also used by the air forces of several other nations, and formerly, by the U.S. Navy's Flight Demonstration Squadron, the Blue Angels

Strike Fighter Squadron 83 (VFA-83), also known as the "Rampagers", are a United States Navy F/A-18E Super Hornet fighter squadron stationed at Naval Air Station Oceana. They are a part of Carrier Air Wing 3, their tailcode is AC and their radio callsign is Ram.

This model can be displayed on the stand or with the landing gear down The Boeing 747-400 is a wide-body airliner produced by Boeing Commercial Airplanes, an advanced variant of the initial Boeing...