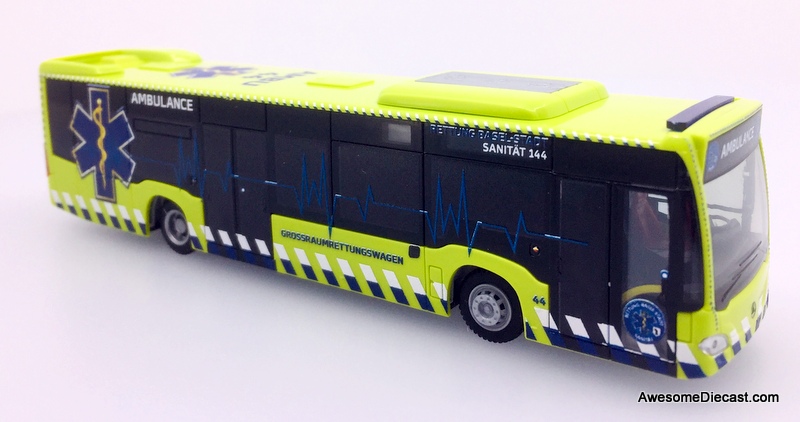 These buses are made from ABS

The mirrors are in the box

The Mercedes-Benz Citaro is a single-decker, rigid or articulated bus manufactured by Mercedes-Benz/EvoBus. Introduced in 1997, the Citaro is available in a range of configurations, and is in widespread use throughout Europe and parts of Asia, with more than 55,000 produced by December 2019

Basel or Basle is a city in northwestern Switzerland on the river Rhine. Basel is Switzerland's third-most-populous city (after Zürich and Geneva) with about 175,000 inhabitants. The official language of Basel is (the Swiss variety of Standard) German, but the main spoken language is the local Basel German dialect.

Basel is famous for its many museums, ranging from the Kunstmuseum, the first collection of art accessible to the public in the world (1661) and the largest museum of art in Switzerland, to the Fondation Beyeler (located in Riehen) and the Museum of Contemporary Art (Basel), the first public museum of contemporary art in Europe. Forty museums are spread throughout the city-canton, making Basel one of the largest cultural centres in relation to its size and population in Europe.

This model is made from ABS plastic and the mirrors for it are in the box The Mercedes-Benz Travego (also known as O580) is an integral coach produced since 1999 by Daimler/EvoBus in Neu-Ulm and...

The mirrors and wipers for this model are in the box Gänserndorf is a town on the Marchfeld, Lower Austria, Austria and the capital of Bezirk Gänserndorf. It is about 20 km northeast of...

The mirrors for this bus are in the box Solaris Urbino 12 is a series of 12.0-metre low-floor buses from the Solaris Urbino series designed for public transport, produced since 1999 by the Polish...