John Cooper Works (JCW) is an English company based in Farnborough, Hampshire, founded in 2000 by Michael Cooper, son of John Cooper, the racing car maker and tuner responsible for the original Mini Cooper and owned by BMW. JCW produces tuning parts and accessories for BMW's new Mini.

The first JCW Tuning Kit to be made available for the Cooper S was an upgrade for the Cooper S, producing a total of 200 bhp (150 kW). Released in 2002, the kit consisted of the following components:

Uprated cylinder head, gas-flowed and ported
11% Reduction of the supercharger pulley size, making the same supercharger spin faster for a particular engine speed
1-step colder, Colder Temperature Range spark plugs
Uprated exhaust system (maintaining the same header and catalytic converter)
Remapped ECU
Decorative badges, individually numbered engine plate and certificate signed by Mike Cooper
At the time, the kit could not be factory-ordered, but had to be retrofitted at a Mini dealer, but from late 2005 the Cooper S could be ordered with the upgrade straight from factory.

In 2005, an additional upgrade was launched that increased power further to 210 bhp (160 kW), with the following components:

Uprated injectors (380cc/min instead of 330 cc/min)
Remapped ECU for the injectors
Uprated air intake system and air filter
A "JCW Sound Kit" was made available at the same time, consisting of the cat-back exhaust and the air filter, giving a sportier exhaust note and a 3 bhp (2.2 kW) power increase for around €1100.

Cooper S R55, R56 and R57
In 2007, Mini released the JCW tuning kit for the new "R56" version of the car. This new version now being turbocharged as opposed to supercharged, the kit itself is very different from that of the previous Cooper S. Consisting of an uprated induction system, exhaust and ECU remap, this kit raises power 17 bhp (13 kW) to 192 bhp (143 kW). The torque figure climbs 10 Nm to 250 Nm (270 Nm with overboost). Acceleration from 0–100 km/h (0-62 mph) is now 6.8 seconds, and a top speed of 232 km/h (144 mph) is now possible. This kit is commonly referred to as the "Stage 1 Kit", although this nomenclature has never been officially employed by JCW or by BMW.

According to Mike Cooper, this kit would create "the fastest Mini ever produced" above all due to the extra torque and in-gear acceleration, which in certain driving situations will be even faster than the 218 bhp (163 kW) Mini JCW GP.

In 2011, the JCW tuning kit was updated for the Cooper S LCI (135 kW). The kit consists of an uprated exhaust (cat-back), intake system, exhaust manifold and an ECU remap. The tuning kit includes a small plaque with a unique serial number mounted on the engine, as well as front and rear JCW emblems. The power is increased 12 kW from the standard 135 kW to 147 kW.

Factory John Cooper Works R56
In mid-2008, Mini brought out a new addition to the JCW family - the Mini John Cooper Works. This is in fact not another power kit, but a whole new version of the R56 Mini Hatch, model code MF91 (MM91 in the Clubman version). This new version comes with major differences from the factory, compared to the 192 bhp (143 kW) power kit that can be supplied through the dealer network: 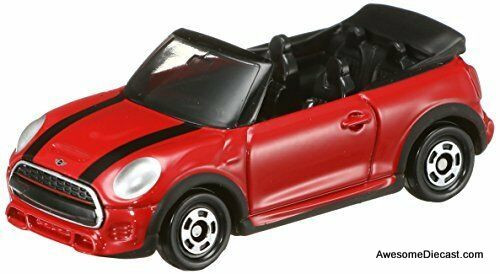