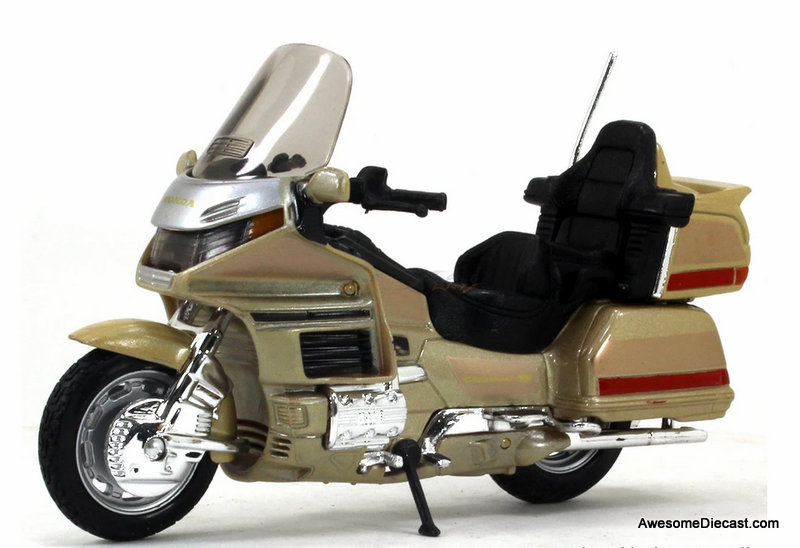 The Honda Gold Wing is a series of touring motorcycles manufactured by Honda. Gold Wings feature shaft drive, and a flat engine. Introduced at the Cologne Motorcycle Show in October 1974, the Gold Wing went on to become a popular model in North America, Western Europe and Australia, as well as Japan.

A new design team began work on the fourth-generation Gold Wing in 1984. Honda describes prototype testing as involving sixty developmental stages, and building fifteen different test bikes, including one made from a GL1200 frame coupled with the original M1 engine so that a six-cylinder could be compared to a four-cylinder head-on. This early '70s prototype had an influence far beyond what the M1's initial designers could have expected.

New Gold Wing engine design goals were smoothness, quietness and enormous power. Ultimately, a redesigned Gold Wing made its debut at the 1987 Cologne Motorcycle Show, 13 years after the original GL1000 was first shown to the public at the same venue, and the GL1500 brought the most changes seen to the Gold Wing series since its inception. The biggest difference was that the flat-four engine was replaced with a flat-six engine. Although the GL1500 still used carburetors, there were just two large 36 mm CV Keihins supplying all six cylinders, the first time any Gold Wing had less than one carb per cylinder.

Honda also enclosed the entire motorcycle in plastic, giving it a seamless appearance. The seat height was lowest yet on a Gold Wing, the passenger back rest and trunk were integrated, and a central mechanism locked the trunk lid and saddlebags. Rear suspension air pressure was adjusted by an on-board compressor. One major innovation was the addition of a "reverse gear", which was actually a creative use of the electric starter motor linked to the transmission. Because of the size and weight, Honda felt that some people would have problems backing it up.

The new Gold Wing had grown in nearly every dimension. A larger windshield, longer wheelbase, two more cylinders, more horsepower, more bodywork, more electronics, more accessories and more mass: 794 pounds (360 kg) dry. Options include a passenger audio control and rear speakers, CB radio, auxiliary lights and exterior trim. In another first for the GL1500, 1988 was the year Honda exported Gold Wings from the US to Japan for the first time.

This model is sold in a blister pack The D/W series was a line of pickup trucks that was sold by Dodge from October 1960 to September 30, 1993. The same basic design was retained until the October...