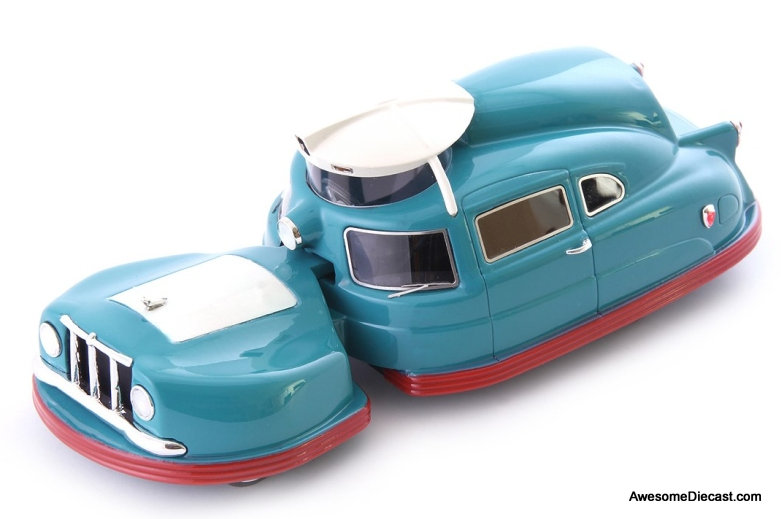 Engineer Walter C. Jerome must have been a tireless optimist. He worked on his vehicle concept for ten years and yet he did not find a single buyer for his car, which went down in automotive history as “Sir Vival”.

The American from Worcester, Massachusetts, descripted his car as a “revolutionary vehicle” – and it undoubtedly was. However, his revolution did not find the hoped-for appeal, because its appearance and conception did not meet the zeitgeist of the 1960s at all.

How far ahead of his time the engineer was can be seen in the installation of the seat belts alone, which were not to meet with acceptance by the population until decades later. However, there were also inventions that were much more lacking in practical relevance. The most striking, but also the most unusual solution was the central division of the car. Walter C. Jerome saw this division as the ideal absorption of lateral forces in the event of a collision. At the same time, smaller shocks were gently absorbed via a completely circumferential rubber buffer on the body. Another consideration that was found in the sense of safety of the unconventional vehicle was 3-foot higher, all-around rotating driver’s seat in the cockpit opposite of the maximum of four passengers who could take a seat in the rear of the car. The elevated seat should give an improved view of the front and thus of the traffic. Three headlights ensured a first-class illuminated road. Two headlights were swinging along at the front during a curve, while the center, placed at the level of the driver, shone straight ahead. In the front part the engine of the “Sir Vival” with its driven front axle found its space.

Resin cast with plastic parts.   During the chaos of war the French factory owner Emile Mathis took on the new challenge to develop a small and affordable car, which should appeal the French...

The Porsche 930 is a sports car manufactured by German automobile manufacturer Porsche between 1975 and 1989, known to the public as the 911 Turbo. It was the maker's top-of-the-range 911 model for...

This is a limited edition model with only 333 pieces made world wide According to his own ideas. The automotive love of the retired investment manager belonged primarily to the European sports cars...

There are only 333 of these book sets produced and each one is numbered The new Edition 2022 is a different kind of book – it is THE book for the automotive enthusiast who wants to learn more...

This is a limited edition model with only 333 models distributed world wide In the mid-1970s, anyone who wanted to have a mobile telephone communication system and stable TV reception at anytime and...

This is a limited edition model with only 333 models distributed world wide In the design of the T82 truck, the wishes of the military were specifically taken into account. The T82 was fitted with...