The chrome smoke stacks for the truck are in the box

In 1967 White Motor Company started the Western Star division as White Western Star with a new plant at Kelowna, British Columbia, sharing headquarters with White in Cleveland, Ohio. White Western Star trucks in that era typically used cabs from its sister company,Autocar. Western Star production was moved to Ogden, Utah, but it was not included in the 1980 sale of White to Volvo, instead being sold to Bow Valley Resources and Nova Corporation, each owning 50%.

In 2000, Western Star was purchased by DaimlerChrysler, becoming part of the Freightliner Trucks division.

Western Star produces a range of Class 8 commercial vehicles for both highway and off-road use. Western Star specializes in trucks tailored to customer specifications. Every Western Star offers several sleeper box sizes, with chassis lengths of up to 486 inches depending on model. Five interior packages are available and sleepers can be trimmed to specifications. Engines, transmissions, axles, suspensions and brakes are available in a number of configurations. Engines used include Cummins and Detroit. Western Star also produces right-hand drive trucks for the Australian, New Zealand and South African markets.

Though styled in a conventional fashion and often used in off-road applications, Western Star trucks are also available with anti-lock brakes, traction and stability control, and other modern safety features in order to remain competitive and meet DOT regulations.

The 4900 Series features a 123-inch (3,120 mm) BBC. This is a multi-use truck/tractor which is targeted at a variety of industries. The truck can be built as a tractor with fifth wheel, bare chassis for a bodybuilder to outfit, or a lowered-cab model (Low Max) for auto hauling. The 4900 is available in five configurations including Extreme Duty and Twin Steer. 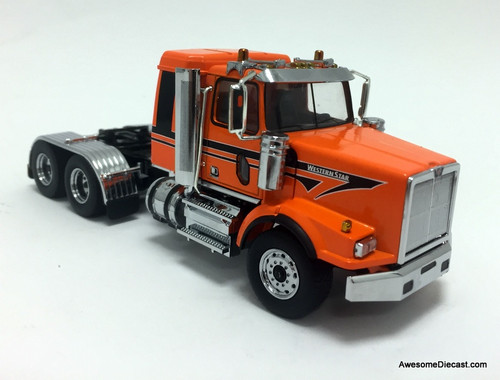