The Willys Aero was a line of passenger cars manufactured first by Willys-Overland and later by Kaiser-Willys Corporation from 1952 through 1955. It was also produced in Brazil from 1960 to 1971.

The father of the Aero was Clyde Paton, former engineer for Packard Motor Car Company. The Eagle and Lark models were built from 1952 to 1954. A Wing model was available only in 1952, a Falcon model in 1953, and a taxicab in very limited production in 1953 and 1954. The Ace was the only model built through all U. S. production. 1955 saw two new models, the two- and four-door Ace sedans (renamed Custom shortly into the production run) and two-door hardtop Bermuda. Production in the U.S.A. ended that year as Henry J. Kaiser decided to give up the Kaiser and Willys Aero lines and concentrate solely on Jeeps. A total of 91,377 Aeros were built in Toledo.

Toledo-built models were available with four engine options: the F4-134 Hurricane, the L6-161 Lightning, the F6-161 Hurricane; and, after the Kaiser firm purchased the Willys firm, the L6-226 Super Hurricane from the Kaiser car line. The four-cylinder was used only in Aero Lark and was only exported.

For 1952, the model names Eagle, Wing and Ace were used for cars that had the six-cylinder F-head Hurricane engine and the Aero-Lark had the six-cylinder flathead Lightning engine. All 1952's had a two-piece split windshield. Eagles and Aces had a three-piece wraparound rear window, while the Larks and Wings had a smaller one-piece rear window.

Owners of the 1952 model tended to buy the cars for their good fuel economy. They tended to find acceleration to be 'very good', unsurprising given the cars had the best power-to-weight ratio among US production cars. The primary complaint from two-door owners was the difficulty of access to the rear seat. Many felt the cars cost too much, even if they were a bargain on performance for cost grounds. Floyd Clymer noted the car was quite capable of comfortably cruising at highway speeds of 80–90 miles per hour.

This continued for 1953 except the Wing was dropped and replaced by the Aero-Falcon, which had the six-cylinder Lightning engine. All 1953s were available as two-door or four-door sedans except the Eagle, which was a two-door hardtop. One-piece windshields were given to the Aces and the Eagles, but the Lark and Falcon retained the split windshield. Rear windows remained the same. Export Larks were available with the four-cylinder F-head engine. Dual-range Hydramatic transmissions were bought from GM and were optional in Aces and Eagles beginning in August 1953. 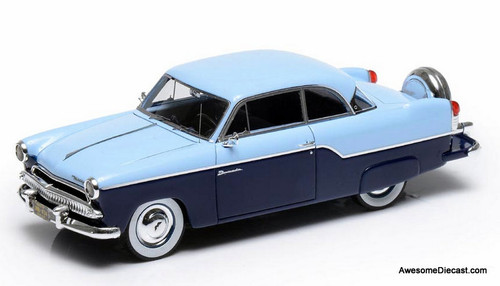