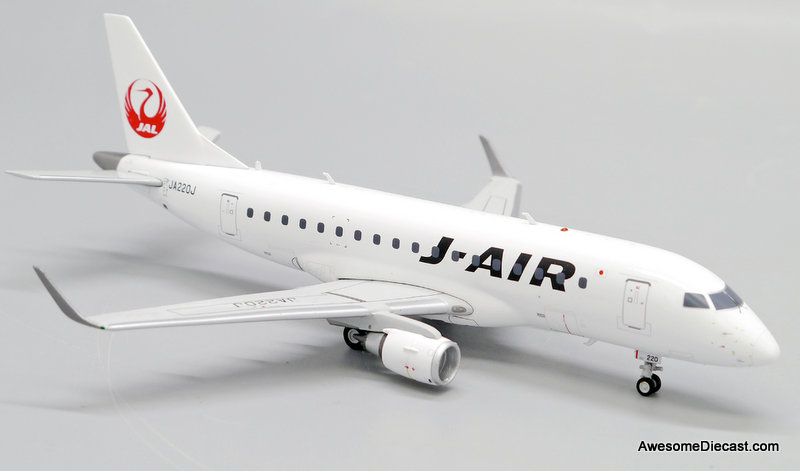 The Embraer E-Jet family is a series of four-abreast narrow-body short- to medium-range twin-engine jet airliners, carrying 66 to 124 passengers, produced by Brazilian aerospace manufacturer Embraer. The aircraft family was first introduced at the Paris Air Show in 1999 and entered production in 2002. The series has been a commercial success primarily due to its ability to efficiently serve lower-demand routes while offering many of the same amenities and features of larger jets. The E-Jet family is used by mainline and regional airlines around the world and is particularly popular with regional airlines in the United States.

J-Air Co., Ltd, is a regional commuter airline with its headquarters in the Terminal Building in Osaka International Airport near Toyonaka, Osaka Prefecture, Japan and its main hub at Osaka International Airport. J-Air previously had its headquarters in Nagoya, Aichi Prefecture. Its operations include scheduled passenger services to 17 destinations across regional Japan, under Japan Airlines flight numbers. The airline has a fleet of 35 aircraft, consisting of Embraer 170s and Embraer 190s linking tier-two and tier-three cities in Japan as to bypass JAL's congested hub in Tokyo (both Narita and Haneda).

J-Air is a wholly owned subsidiary of Japan's flag carrier, Japan Airlines (JAL) and an affiliate member of the Oneworld alliance. The airline was founded on August 8, 1996, when JAL restructured JAL Flight Academy and J-Air was separated; and began operations as a separate entity from Hiroshima-Nishi Airport on November 1. Faced with limited opportunities for route expansion at Hiroshima, the airline relocated to its new home at Nagoya Airfield, after the opening of Chūbu Centrair International Airport, on February 17, 2005. In the fiscal year ended March 31, 1999, J-Air, together with its sister airlines within the JAL Group, carried over 32 million passengers and over 1.1 million tons of cargo and mail.

This model can be displayed on the stand or with the landing gear down The New England Patriots are a professional American football team based in the Greater Boston area. They compete in the...